ST. LOUIS, July 16, 2019 – Schnuck Markets, Inc. today announced that Schnucks customers, vendors, and the company donated a total of $1.25 million to the Folds of Honor Foundation, a nonprofit that provides educational scholarships to the spouses and children of veterans who were killed or injured in the line of duty. Schnucks’ six-week “Round up at the Register” campaign allowed customers to round up their purchase to the nearest dollar to benefit Folds of Honor. The $1.25 million will provide 250 college scholarships for veterans’ family members. The “Round up at the Register” campaign took place from Memorial Day through Independence Day at all Schnucks stores across the five states where the company operates.

“We thank our generous customers, vendor partners, and teammates for their enthusiastic support of such a worthy cause,” said Schnucks Chairman and CEO Todd Schnuck. “We can never do enough to express our gratitude for military veterans and their families, but we are proud that our customers and our company were able to demonstrate that gratitude by increasing this year’s Folds of Honor total by 14 percent over last year.”

“We were so excited to see that Schnucks’ and its customers came back even stronger in their second year of supporting us,” said Folds of Honor Founder Major Dan Rooney. “We are humbled by the continued support and so grateful that these funds will allow us to continue to support service members and their families who sacrifice so much for all of us.”

Schnucks customers donated more than $1.1 million during this year’s campaign, while contributions by Schnucks, its teammates, and several of its vendor partners, including Anheuser-Busch, Coca-Cola, Redneck Riviera Whiskey and the St. Louis Cardinals, brought the total to $1.25 million. 100 percent of the funds will benefit Folds of Honor.

Prior to the start of the St. Louis Cardinals game on July 12, Schnucks representatives and Folds of Honor Executive Vice President Ben Leslie joined a scholarship recipient on the field at Busch Stadium for the check presentation.

Folds of Honor was established 12 years ago after Major Rooney, a U.S. Air Force fighter pilot, saw the grieving family of a fallen U.S. Army Corporal meeting their loved one’s flag-draped coffin on an airport tarmac. The 501(c)(3) has awarded more than $130 million in scholarships to military spouses and children since 2007.

About Schnucks
Founded in St. Louis in 1939, Schnuck Markets, Inc. is a third-generation, family-owned grocery and pharmacy retailer committed to nourishing people’s lives. Schnucks operates 116 stores, serving customers in Missouri, Illinois, Indiana, Wisconsin, and Iowa, and employs 14,500 teammates. According to Forbes’ 2018 rankings, Schnucks is the 168th largest privately-owned company in the United States and the 16th largest privately-owned grocer. Schnucks is committed to helping communities thrive and as a champion for reducing hunger, the company annually donates more than $13 million in food to pantries that help those in need. Follow Schnucks on Facebook: www.facebook.com/schnucks. 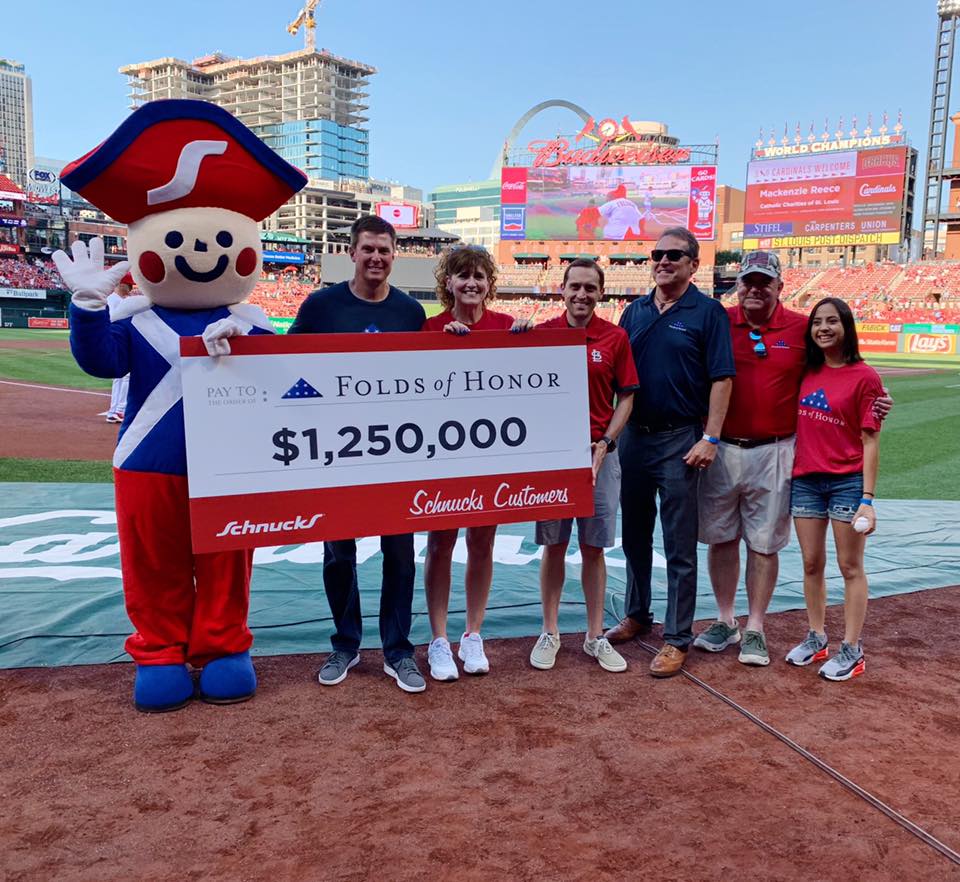